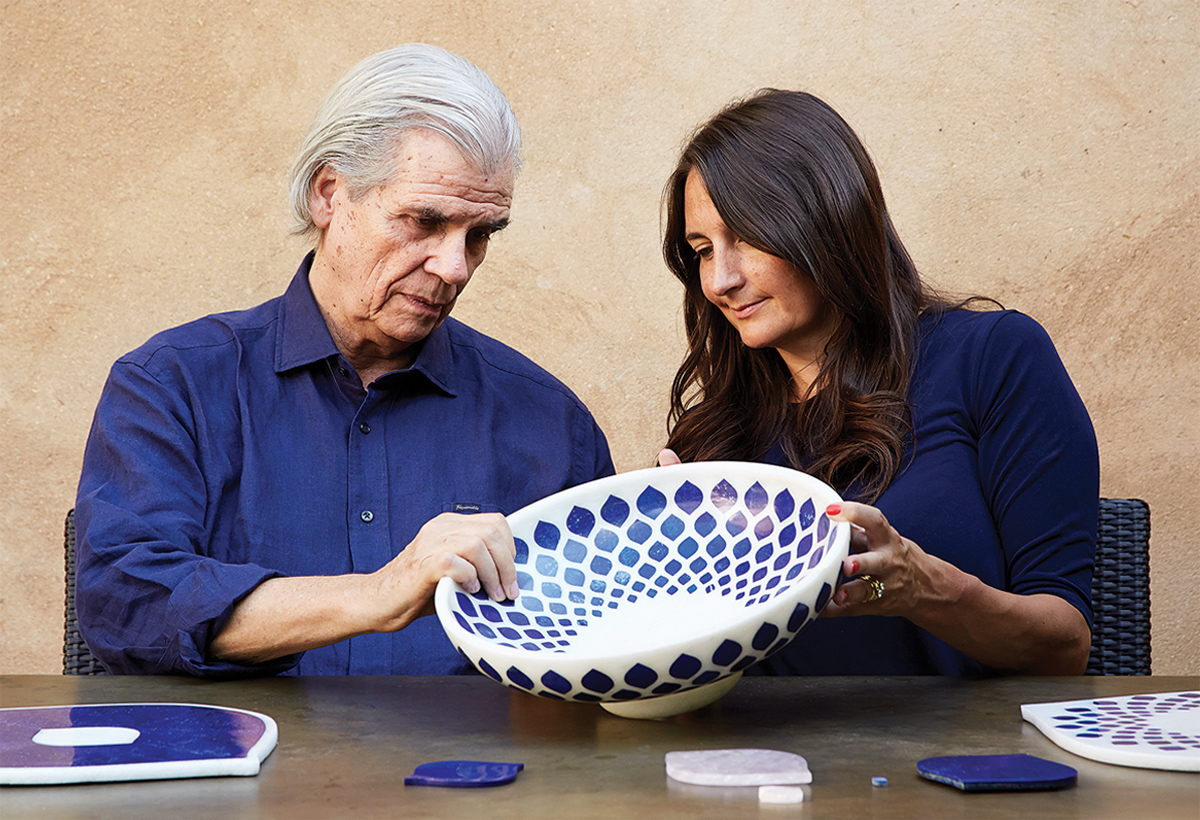 Profile • About
The seeds of The Ruby Tree were planted when Mitchell Abdul Karim Crites saw award winning British designer Bethan Gray’s award winning ‘Black & White Stripes Collection’. As a renowned Islamic arts scholar known for his revival of traditional Islamic crafts, he was struck by the harmony and intricacy of the patterns, so much a hallmark of the finest Islamic art. He wrote to Bethan expressing his belief that her work revealed ‘a profound sense of Islamic art.’
A Shared Vision

When they met they realised they shared a vision of beauty based on the finest natural materials, expert craftsmanship and purity of form. Their mutual admiration for traditional craftsmanship & concern for its endangered status in an age of mass production led to the founding of The Ruby Tree.

The creative partnership between renowned Islamic art scholar Mitchell Abdul Karim Crites and British designer Bethan Gray has deep roots. Both come from a heritage that reveres the craft traditions of the past.

Bethan’s extraordinary background--her family hails from an ancient Rajasthani clan that over centuries migrated across Arabia and Persia into Europe, settling in the Celtic heartland, Wales-- weaves a rich pattern of influences and inspirations. Her work resonates across cultures and reflects her travels in India, Asia, the Middle East, Northern Africa and South America. Bethan Gray’s rise to become ‘British Designer of the Year 2013’ reveals an innate ability to absorb and reinvent the best elements of design for a 21st c audience. Her bohemian and artistic background is reflected in her designs, which draw on craft traditions of both East and West. She combines cutting edge design technology with a deep knowledge of the values of traditional craftsmanship. Intricate patterns of light and dark, texture, purity of line, clarity, harmony and a connoisseur’s eye for detail define her highly original style.

She is inspired by everyday items that surround us all, as well as those discovered whilst traveling the globe during her years as Design Director at Habitat and later as the founder of her own design atelier, Bethan Gray. Her work has been exhibited in Paris, Milan and London, and her own boutique collections are available globally from leading retailers such as Harrods and Liberty, and featured extensively in the design press.

Mitchell Abdul Karim Crites has spent his life studying, preserving and reviving the great art forms of the Islamic world—a journey that has taken him from the sacred mosques of Mecca to the Metropolitan Museum of Art. His ability to source, nurture and inspire creative talent is renowned. With a working knowledge of Sanskrit, Hindi, Persian, Urdu and various styles of Arabic calligraphy, he is able to communicate directly with craftspeople throughout the Islamic world. Mitchell Abdul Karim is also the author of a variety of books on Indian and Islamic design, including the best-selling India Sublime.

Abdul Karim serves on the Board of Trustees as an advisor on the revival of traditional Afghan arts and crafts for the prestigious Turquoise Mountain Institute in Kabul, founded by HRH Prince Charles.